By wellandah February 25, 2013 Uncategorized
No Comments 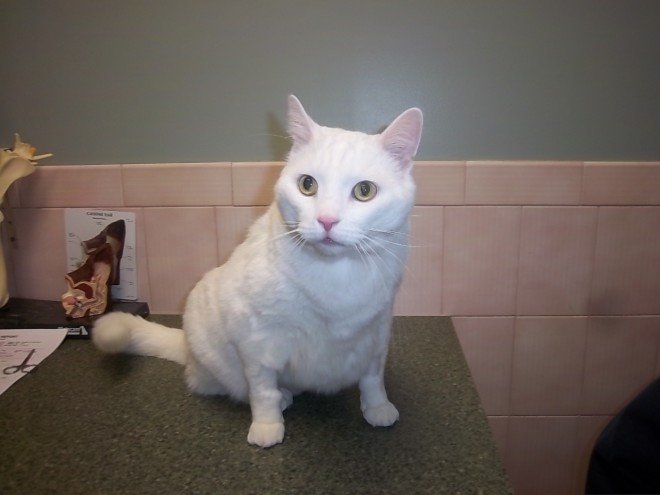 “Moey” is a very sweet 9 year old male cat who recently presented to Welland Animal Hospital with a history of weakness, lethargy, poor appetite, breathing difficulties – panting  and no urine or BM’s noted recently. Physical examination revealed moderate dehydration, painful abdomen on palpation with a large turgid unexpressable bladder.  Respiration’s were shallow and increased with palpation of bladder, but no other abnormalities were auscultated.  A preliminary diagnosis of urinary obstruction was made and Moey was admitted to the hospital for blood-work, intravenous fluids, and urinary catheter placement to unobstruct the urethra as well as continued monitoring.

Urinary obstruction is a common problem most usually affecting younger male cats.  Most commonly the cause is a large number of crystals/stones  in the urine which block the narrow male urethra making it impossible to urinate.  This is a life threatening condition as electrolyte and other metabolic changes will eventually result in cardiac arrhythmias and death.  Other causes of obstruction may be tumours of the bladder/urethra, blood clots after trauma (hit by car) urethral mucus plugs…There are numerous factors that may predispose some male cats to form crystals/stones that lead to urinary obstruction including, diet, genetics,  size of urethra, water consumption and concentration of urine to name a few.  Any cat showing signs of straining to urinate, blood in urine, vocalizing during urination, urinating frequently, not eating, vomiting, painful abdomen should be evaluated by a veterinarian immediately.

Moey was started on IV fluids immediately to correct dehydration and electrolyte abnormalities and promote urine production. Blood work revealed severe azotemia (elevated kidney values BUN+CRT) as well as severely elevated phosphorous and potassium secondary to being unable to urinate, and dehydration.  Primary kidney disease could  not be ruled out at this time but it was hoped that the azotemia was due solely to post renal obstruction and would not be permanent.  Moey was sedated and given pain medication and his urinary obstruction relieved through flushing of the urethra multiple times.  A urinalysis showed marked hematuria (red blood cells in the urine) and a small number of crystals. A silicone urinary catheter with a closed urinary collection system was placed for 72 hours.  The bladder needed to be kept small for a period of time so the muscular layer  of the bladder wall could recover from the serious stretching that occurs during obstruction. Repeat blood work after 48 hours of IV fluids and unobstruction revealed normal electrolyte and kidney values and Moey was feeling much better.  However, after the urinary catheter was removed Moey once again had difficulty urinating and had  a poor urine stream. Radiographs of his abdomen were taken and revealed a bladder full of small radio-dense stones.  Because of the likelihood of re-blocking and an already compromised urinary system a cystotomy was recommended over any attempt to dissolve the stones with a special diet. 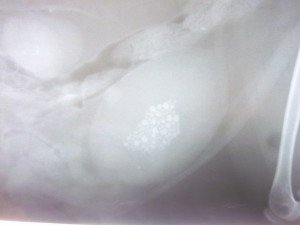 A routine ventral cystotomy (surgically opening the bladder to remove the stones) was performed and all stones removed after multiple flushes through a urinary catheter. 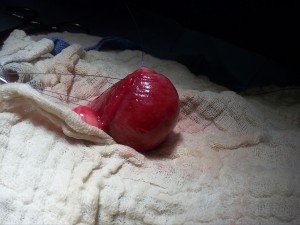 The bladder wall was extremely thickened secondary to chronic inflammation but the surgery was successful and all stones were removed as seen on the post -op radiograph. The end of the urinary catheter can also be visualized in the radiograph. 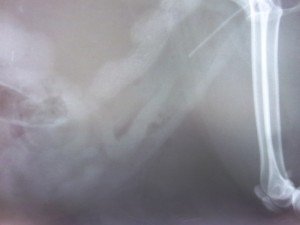 Moey’s urinary catheter was kept in place for a few days and he was discharged from the hospital urinating well.  He continues to do well at home on a special diet while we wait for the bladder stone analysis from the lab after which we can formulate a plan to attempt to prevent the recurrence of the stones through diet, medications ..etc. 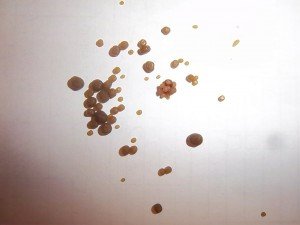 We recommend  radiographs every 4-6 months initially to check for stones and monitor his kidney values and urine for any signs of disease/recurrence. Unfortunately some cats will continue to form stones despite dietary and medical management  and may require additional surgeries in the future.

The timely presentation of Moey to Welland Animal Hospital  by his loving owners was paramount in a successful outcome.  Moey was a pleasure to work with and we wish him all the best in the years to come.