“Bella” is a 4 year old retriever mix who was hit by a car Nov 1, 2012 and was dragged for a short distance.  She was non-weight bearing on her left rear leg with a significant degloving wound.  Her left hock was swollen but appeared stable and there were no palpable fractures.  Although in obvious discomfort she was otherwise stable.  Degloving injuries are commonly associated with motor vehicle trauma and occur when the body is dragged along a hard coarse abrasive surface (asphalt) which literally removes the soft tissue (skin, muscle) and sometimes the ligaments, bone, and nails as well.  Usually the wounds are infected as dirt and other debris are driven into the wound.  Large degloving wounds on the extremities are always a challenge due to the lack of skin and  difficulty closing wounds surgically.  Some wounds will heal secondarily with multiple bandage changes while others may require, delayed surgical closure +/- use of skin grafts, pedicle grafts, or wound care products that support and maintain a healing environment.(ACell Vet) 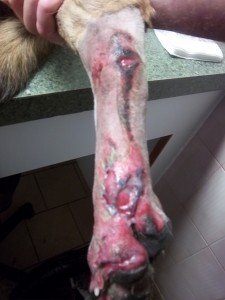 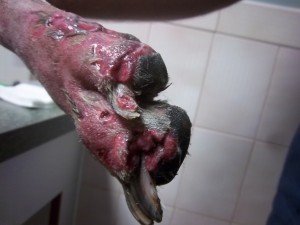 “Bella” was given pain medication and sedated so the wounds could be clipped, cleaned, debrided and flushed extensively.  Antibiotics were started, and a soft padded dressing was placed over an application of granulated sugar on the wound surface.  Sugar dressings have been used successfully for many years  and effectively clean the wound.  The sugar creates an environment in which bacteria cannot grow but healthy granulation tissue can form.  It is an inexpensive wound care ingredient and it is relatively easy to do bandage changes as it is relatively non-adherent. Bandage changes were done daily – initially with sedation and pain control.  The owner’s were able to do a lot of the bandage changes and the wound was closely monitored over the next 2 weeks with remarkable results.  Weight bearing gradually improved as the wound and the swelling improved. 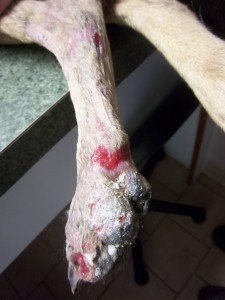 Once healthy granulation tissue was present and minimal discharge was observed, the sugar was discontinued and and a non aderent dressing placed every other day.  The owner’s were extremely diligent in keeping the bandage clean and dry and changing it if it was soiled.  This was instrumental in the healing of this degloving wound. This is the wound 4 & 6 weeks after the trauma  completely healed. 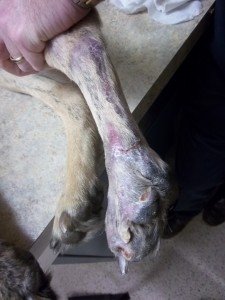 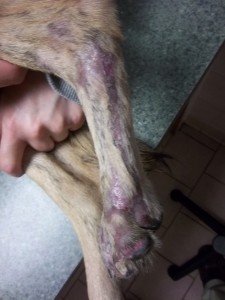