Welland Animal Hospital Case of the Month – “POE” and a Noodle

By wellandah October 18, 2012 Uncategorized
No Comments

“Poe” is a very cute 1.5 year old black male cat who came to Welland Animal Hospital with a history of multiple episodes of severe vomiting, no  interest in food and acting very quietly over the last 12 hours.  He had no previous medical problems except for some vomiting 1 month previously after chewing on a flotation foam “pool noodle”.  Bloodwork was unremarkable, and abdominal radiographs revealed no radio-dense foreign body but there was an unusual gas pocket in the small intestine.  Abdominal palpation was unremarkable except for some mild discomfort.  “Poe” was placed on IV fluids to maintain his hydration, and medications to control his vomiting and discomfort.  This initial supportive care did not seem to alleviate his  abdominal problems and repeat abdominal radiographs revealed a similar gas pocket and slight dilation of a small portion of his small intestine.  An exploratory surgery was recommended in an attempt to discover what was causing “Poe”‘s problems.

A thorough exam of his abdomen revealed an inflamed pancreas and duodenum (first part of the small intestine) – consistent with pancreatitis and possible local irritation from a foreign body.

Further along his small intestine  (mid jejunum)  a foreign body was palpable which completely blocked the passage of gas and fluid. 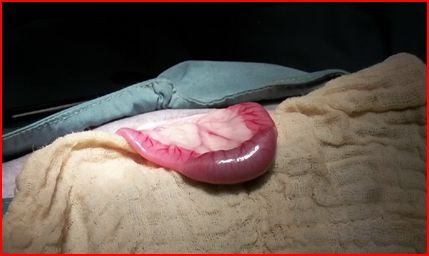 The intestines had lost there normal motility (ileus).  The intestine in which the foreign body was found looked  viable and an incision was made just beyond the obstruction (enterotomy) and the foreign material was gently pushed out of the incision.

The foreign material was – you guessed it – a large piece of compressed foam from the previous chewed “pool noodle” – which had probably sat in the stomach for a month before proceeding into the small intestine and causing an obstruction.  The intestinal incision was sutured and the abdominal incision routinely closed.  “Poe” recovered uneventfully and is doing very well.  No more “noodles” for you.