By wellandah June 28, 2013 Uncategorized
No Comments 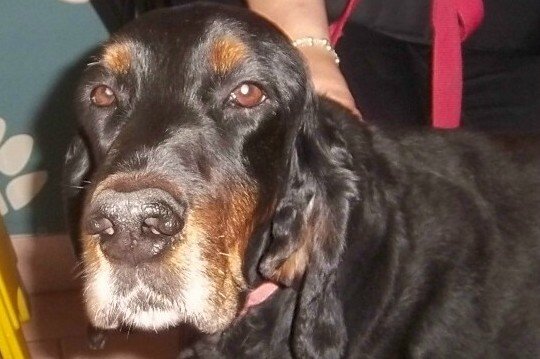 “Shannon” is a very sweet 12 year old female spayed Gordon Setter who presented initially with a swollen left hind medial digit (toe) with an abnormal or deviated nail.  The toe had gradually become more swollen and the nail had been abnormal for several weeks. There was a small amount of discharge noted at the nail base.  There was no known trauma.  The toe was uncomfortable on palpation although Shannon is a very stoic dog. Blood work was unremarkable.  Potential rule outs for a swollen digit include trauma, chronic infection (bacterial, fungal)  or neoplasia (cancer).

Radiographs of Shannon’s LH paw were recommended and can be seen below.  There is a moderate ST swelling around the medial digit of the LH paw with bony lysis evident in P3 ( 3rd phalanx) and the distal part of P2( 2nd phalanx). (red arrow).  Bone invasion of the digit on radiographs in older dogs is commonly seen with neoplasia (cancer). Possible tumors include squamous cell carcinoma, melanoma, soft tissue sarcoma, osteosarcoma and mast cell tumors.  Prognosis very much depends on tumor type (ie. how locally aggressive and the  metastatic potential of a particular tumor – ie the potential of the cancer to spread to other parts of the body). 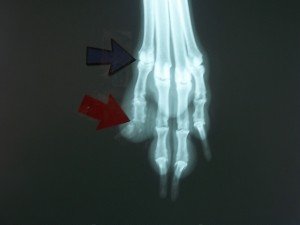 The recommendation to amputate the medial digit at the Metatarsal and P1 junction was made (blue arrow on rads).  This would allow for a definitive diagnosis with histopathology (biopsy) as well as remove any discomfort the abnormal digit was causing.  In case the diagnosis was cancerous the amputation was made at a level which appeared healthy on the radiographs and which would leave a large clean margin. The central 2 digits are the primary weight bearing digits so the removal of the medial digit usually does not cause any significant lameness.

The amputation surgery went very well. The toe was removed, blood vessels ligated and the incision closed.  A soft padded bandage was applied and changed every few days and Shannon was sent home with pain medication.  The site healed nicely and Shannon is walking well. 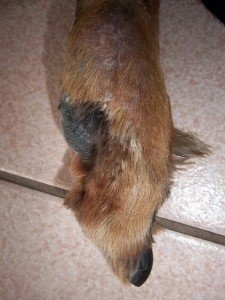 The biopsy came back as a nail bed squamous cell carcinoma with clear margins devoid of any tumor. These types of tumors represent about one third of the digital tumors in dogs.  They generally occur in older dogs and more commonly in large breed dogs with black coats.  They are usually solitary tumors and often cause disfigurement or loss of the nail.  This type of tumor has a low metastatic potential (don’t often spread to other areas of the body) and are often successfully treated by amputation.  We are hopeful that Shannon will continue to do well – she and her parents are fantastic – many thanks for the shortbread cookies.